Take a moment and think about how you might be creating waste products. Do you think of food scraps, un-recycled plastic, or exhaust from your car? True, those are valid sources of human-made waste. But have you ever considered the caffeine from your coffee, the ibuprofen you use for aches and pains, or the preservatives in lotion and makeup as a form of potentially harmful waste? These chemical contaminants often go unnoticed, washed down sinks or discarded in trash. However, there is growing evidence that chemicals from Pharmaceuticals and Personal Care Products (abbreviated as PPCPs) can create harmful impacts on our environment (Onesios, Yu, & Bouwer 2008).

END_OF_DOCUMENT_TOKEN_TO_BE_REPLACED

Microscopic organisms are everywhere, even in places where you would think they wouldn’t be, such as on clean clothes, clean kitchen counters or even washed utensils. Do you remember those advertisements for disinfectants that claim they can kill 99.9% of bacteria? You might think that 0.1% are left there even after using these antibacterial disinfectants. In Ontario, they have a standard that on a cleaned utensil there should not be more than 100 bacterial cells! Imagine what happens to utensils cleaned in dishwashers without such effective disinfectants! A study was done by scientists in Ontario, Canada on the dishwashers which did not handle a lot of utensils at an instance, such as those in residential care homes. Along with disinfectants, high temperature is also needed to kill microorganisms which is a strategy that dishwashers actually use. But in establishments that have relatively few utensils, household dishwashers are sometimes used instead of commercial dishwashers. The household dishwashers cannot always achieve such high temperatures which means that they need to use sanitizers to treat utensils. The sanitizer has to be used at a set time and concentration but normal dishwashers do not have this function. The study found that 83% of these dishwashers actually worked within the prescribed limits but still there are 17%, that is, more than 1 out of 6 instances that your utensils actually contain a lot of microbes. So the next time you take the utensils out from the dishwasher, think again if they are clean or not. Also, if you live in residential care facilities or places that use common dishwashers then you might ask that they install a commercial sized dishwasher instead of domestic dishwasher.

The researchers aimed to study cleaning ability of domestic dishwashers employed in residential care homes. The researchers focused on these places because they know that dishwashers do not work that well if there are fewer utensils cleaned at a time. This happens due to low temperature that water reaches when cleaning occurs. A temperature of 82oC for 10 seconds or chemical sanitization at 24oC is required to properly sanitize the utensils. For samples, they chose 4 establishments with different numbers of dishwashing units to a total of 103 units. Four different types of utensils were selected for the study and were swabbed after one full cycle was over. Standard operating procedures laid out by United States Public Health Service’s (USPHS) were followed. Of the 103 domestic dishwashers evaluated, 85 (83%) yielded results that fell within the prescribed limit of no more than 100 bacterial colonies per utensil as determined by heterotrophic plate count (HPC). Dishwashers that contained utensils classified as somewhat soiled or very soiled before washing were more likely to fail (P < 0.05) than those that were classified as very clean or somewhat clean before washing when all other characteristics and operating parameters and the number of plastic items were controlled for. With increasing maximum rinse temperature, dishwashers were less likely to fail (P < 0.05) while the same characteristics were controlled for. Also, dishwashers were more likely to fail when chlorinated detergents were used (P < 0.05). So even after using a dishwasher on dirty utensils, there is a 16% chance that it will not be as clean as the required standards and we have to use sanitizer in the dishwasher to get the desired results.

Plastic is a broad name given to different polymers with high molecular weight that impact wildlife. Their fragmentation leads to a continuum of debris sizes (meso  to microplastics) entrapped in gyres and colonized by microorganisms. In the present work, the structure of eukaryotes, bacteria and Archaea was studied by a metabarcoding approach, and statistical analysis associated with network building was used to define a core microbiome at the plastic surface. Most of the bacteria significantly associated with the plastic waste originated from non-marine ecosystems, and numerous species can be considered as hitchhikers, whereas others act as keystone species (e.g., Rhodobacterales, Rhizobiales, Streptomycetales and Cyanobacteria) in the biofilm. The chemical analysis provides evidence for a specific colonization of the polymers. Alphaproteobacteria and Gammaproteobacteria significantly dominated mesoplastics consisting of poly(ethylene terephthalate) and polystyrene. Polyethylene was also dominated by these bacterial classes and Actinobacteria. Microplastics were made of polyethylene but differed in their crystallinity, and the majorities were colonized by Betaproteobacteria. Our study indicated that the bacteria inhabiting plastics harboured distinct metabolisms from those present in the surrounding water. For instance, the metabolic pathway involved in xenobiotic degradation was overrepresented on the plastic surface.

I chose this paper because the accumulation of plastic in the ocean is a huge problem, and we generally think of plastics as very challenging to degrade.

Hi! My name is Sara Marshall.

Time to fight many microbes

Science is the best! 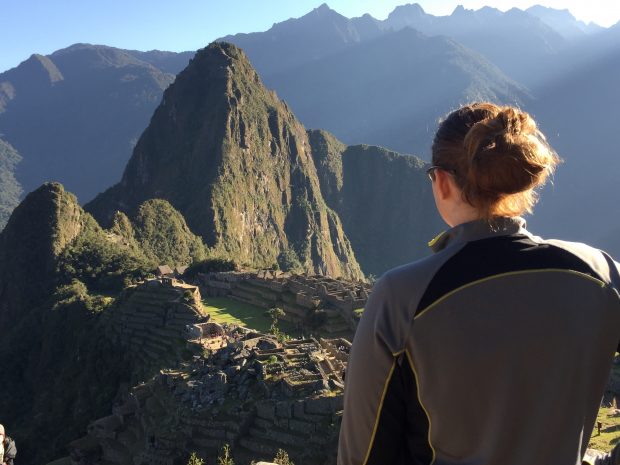 I am an MS student in Civil and Environmental Engineering. The current iteration of my thesis topic is looking at how renewable energy affects wastewater treatment in microgrid communities. I enjoy traveling and reading.