How often to do you think about where the water goes when you flush your toilet? Maybe never until the toilet doesn’t flush or there is wastewater backing up into the tub. Many homes throughout the U.S. are connected to a utility but onsite wastewater disposal systems are also common. According to the Environmental Protection Agency (EPA), an estimated 4 billion gallons of wastewater nationwide is collected, treated, and released from onsite wastewater systems per day.

Onsite wastewater disposal systems can be effective in the removal of pathogens (bacteria and viruses) but can also be major contributors of nitrogen and phosphorous to groundwater and surface waters; a potential problem that is propagated due to septic systems not always being correctly sited, installed, or maintained. Groundwater represents about 97 percent of the earth’s fresh water resource and needs to be protected from potential sources of contamination. Nitrates in drinking water supplies may adversely affect public health and are linked with methemoglobinemia (blue-baby syndrome), increased risk of cancer, and other possible health effects. Excessive nutrients, such as phosphorous and nitrogen, in surface waters can lead to eutrophication and decreased dissolved oxygen leading to adverse effects on aquatic species.

The most common type of onsite wastewater system is a septic system which generally consists of a septic tank and soil absorption system. If a septic system fails to treat wastewater properly, namely complete denitrification, this may lead to contamination of groundwater and surface water. The focus of our Coggle is on nitrogen cycling through a septic system and the ultimate fate of nitrogen released to the environment.

After exploring the coggle, you should be able to answer the following questions: ?

What are the sources of nitrogen input to wastewater?
What makes the septic tank and anaerobic environment?
What types of microbes transform ammonia or ammonium to nitrite, and what do they gain from it?
What happens to nitrogen present in wastewater? Can it pollute groundwater?

Brought to you by Kimberly Fitzgerald, Aasne Hoveid, Ankur Sachan, and Tonya Bear

Considering the multiple sites around the greater Fairbanks area that have been found to have PFC contamination, I thought it would be of interest to learn  more about  the subject.  PFC’s are an emerging contaminant that do not readily biodegrade.

Abstract: The use of fluoride based foams increases the effectiveness of fire-fighting operations, but they are also accompanied by major drawbacks regarding environmental safety of perfluorinated compounds (PFCs). The main concern with PFCs release is due to their well-known persistence and bioaccumulative potential, as they have been detected in many environmental samples. There is a significant knowledge gap on PFC toxicity to plants, even though such data could be useful towards bioremediation procedures. It is consensus that a realistic assessment of fire-fighting foam toxicity should cover as many test organisms as possible, however, few studies combine the performance of ecotoxicological tests with a detailed study of microbial communities in soil contaminated with firefighting foams. Our research evaluated the effects of natural attenuation of PFCs on the development of arugula and lettuce seeds. The effects of variable PFCs amounts were also observed in soil microbiota using the 2,6 dichlorophenol-indophenol redox dye as microbial metabolism indicator. We aimed to determine whether aqueous film forming foams toxicity increased or decreased over time in a simulated contamination scenario. We argued that the long-term biotransformation of fire-fighting foams should be taken in to account when evaluating toxicity, focusing on a time-based monitoring analysis, since potentially toxic intermediates may be formed though biodegradation. The phyto-toxicity of PFCs to lettuce and arugula was high, increasing as a function of the concentration and decreasing as a function of exposure time to the environment. However, very specific concentrations throughout biodegradation result in the formation of non-inhibiting intermediates. Therefore, variable biodegradation-dependent germination rates may be misleading on non-time-based monitoring approaches. Also, the low phyto-toxicity after 240 days does not exclude the potential for PFC bioaccumulation in plants. We also proposed that the colorimetric data modelling could also establish a novel toxicity parameter to evaluate the release impacts to soil and biota. The combined assays allowed the monitoring of PFCs during long-term exposition to plants as well as their immediate effects on the same soil microbiota.

I believe you can click on the above to see the paper. This article focuses on viruses in sewage treatment in an onsite septic system, specifically a mound type system that will has sand to provide physical treatment. These systems are commonly used in permafrost areas and are fairly common in the Fairbanks area.

Abstract:  Studies undertaken to assess the performance of filter materials to remove phosphorus in decentralised sewage systems have not reported on the broader performance of these systems. This study aimed to identify virus fate and transport mechanisms at the laboratory scale for comparison with field experiments on a mound system amended with blast furnace slag. Inactivation was a significant removal mechanism for MS2 bacteriophage, but not for PRD1 bacteriophage. Column studies identified rapid transport of PRD1. Laboratory studies predicted lower removal of PRD1 in a full scale system than was experienced in the field study, highlighting the importance of considering pH and flow rate in pathogen removal estimates. The results highlight the necessity for studying a range of organisms when assessing the potential for pathogen transport.

Many kitchen sinks (and shower heads), have an extendable (pull out) faucet that requires a flexible hose of some length. These hoses are made from different materials and many of the materials leach organic carbon that may facilitate bacterial growth on the surface, referred to as a biofilm, in the hose. The study evaluated different materials commonly used for these flexible hoses and the resultant biofilm growth while simulating realistic use of a kitchen sink or shower. The flexible materials evaluated included polyethylene (PEX) tubing, a silicone based pipe, a pipe with an antibacterial coating containing silver, and two types of polyvinyl chloride (PVC) pipes, one much more expensive than the other. In addition, a non-flexible PEX pipe was evaluated. It’s important to note that the water used in the testing was not chlorinated, which is common for systems that have use groundwater wells for a water source (many public water systems maintain a residual chlorine level in the distribution system).

The results indicated that the PEX tubing (both flexible and non-flexible) as well as the silicone-based pipe leached the lowest amounts of organic carbon (a food source for bacteria) and had the least amount of bacteria growth. However, the community of bacteria that did develop had overall higher numbers of pathogens such as Legionella, a type of bacteria that may cause pneumonia- or flu-like illnesses. The piping with the antibacterial coating initially had lower growth but over-time the coating was lower effective and, after 8 months, it had a similar biofilm to the other flexible pipes tested with the exception of the “cheap’ PVC pipe that had the highest overall number of bacteria present.  Based on their results, the authors suggest that pipe materials should be engineered to leach organic carbon that encourages benign bacterial growth in order to better protect the consumer from harmful pathogen development.

Flexible hoses are commonly used in the last one meter (two to three feet) before a fixture at a kitchen sink or shower. Different materials leach more organic carbon which leads to greater biofilm growth in these hoses. The study evaluated different material types commonly used in household plumbing including polyethylene (PEX) (both a non-flexible and flexible pipe), silicone based piping, one with an inorganic silver-ion coating, and two types of polyvinyl chloride (PVC) pipes, one that was much more expensive and included an ash addition in the pipe material. The study examined total organic carbon leaching and biomass growth in the short term and over a longer term (8 months). A BioMig test package was used to quantify the organic carbon migration potential and biomass formation potential. Fluorescence staining was used to calculated total cell concentration (TCC). Total ATP and organic carbon (TOC) in the biofilm was also determined. DNA extraction, qPCR targeting 16S rRNA genes, and 16S rRNA amplicon sequencing was used with statistical analysis to determine the community structure of the biofilm.

The study showed that the PEX non-flexible pipe overall had the least biomass growth while the “cheap’ PVC pipe had the most. After about 8-months, the other four pipe materials (flexible PEX, silicone, silver-ion coated, and ash-PVC had similar biofilm concentrations. Overall, biofilm concentrations increased over time. The community structure varied by both material and time. The authors also found that even though the same source of water was used in all pipes, the community structures did vary between pipe types. They attributed this to the different types and amounts of organic carbon that are leached from the pipes. The pipe materials with the lowest biofilm concentration also tended to have higher amounts of opportunistic pathogens; the four genera found were Legionella, Pseudomonas, Nocardia, and Mycobacterium with Legionella being common to all samples. Six other genera were also found to be common to all samples and included Caulobacter, Bradyhizobium, Sphigomonas, Methyloversatilis, Phenylobacterium and an unclassified genera within Comamonadaceae. Based on their results, the authors suggest that pipe materials should be engineered to leach organic carbon that encourages benign bacterial growth in order to better protect the consumer from opportunistic pathogen development.

Abstract: This paper presents a conceptual model, developed by synthesizing the results of many researchers, which describes the geochemical evolution of domestic wastewater in conventional on-site septic systems as the result of the interactions of a few major constituents. As described by the model, the evolution of wastewater is driven by the microbially catalyzed redox reactions involving organic C and N in wastewater and occurs in as many as three different redox zones. Anaerobic digestion of organic matter and production of CO2, CH4, and NH4+ predominate in the first zone, which consists mainly of the septic tank. In the second zone, gaseous diffusion through the unsaturated sediments of the drain field supplies O2 for aerobic oxidation of organic C and NH4+ and the consequent decrease in wastewater alkalinity. The NO3- formed by NH4+ oxidation in this zone is the primary adverse impact of septic systems at most sites and is generally an unavoidable consequence of the proper functioning of conventional septic systems. If adequate O2 is not available in the drain field, aerobic digestions is incomplete, and the accumulation of organic matter may cause septic system failure. In the third redox zone, NO3- is reduced to N2 by the anaerobic process of denitrification. However, this setting is rarely found below septic systems due to a lack of labile organic C in the natural setting. Consideration of the changing redox and pH conditions in each zone aids our understanding of the fate of other constituents in septic systems.

Justification: While this is an old paper, the concepts haven’t changed much. I think it is a fantastic example of a simple manmade system that takes advantage of the microbes and nutrients but discusses the potential impacts if favorable conditions don’t exist. While it may not be biologically technical with fancy techniques for analyzing microbes, it is an interesting topic.

My name is Tonya Bear. I’ve been slowly working towards my graduate degree in Environmental Engineering with a specialty in water and wastewater. By “slowly” I mean that I’m in my 4th (or 5th?) year of actively pursuing a master’s degree. Since I work full-time and also have a three-year old son (took a semester off when he was born), I only have time to take one class a semester. My plan is to graduate this Fall (just need to finish my project!). I received my bachelors degree from UAF in Geological Engineering and I’m currently licensed as a Professional Civil Engineer.

I unfortunately missed the first day of class so I hope my Haiku meets the intent: 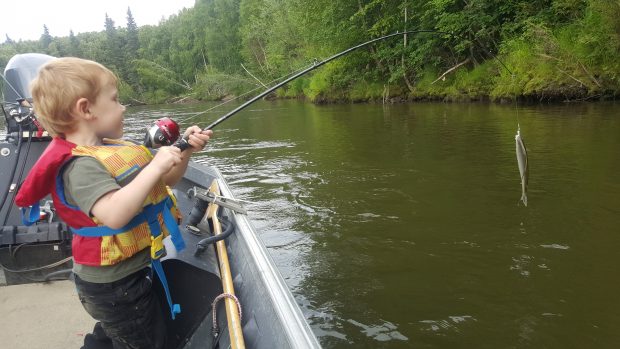