Whenever you see oil rigs or pollutants cover the soil, you must be pondering how much of a deal contaminants are to the environment. To put it into perspective, oil spills that come from industrial activities such as petroleum engineering and waste disposal is a problematic global issue for the environment. The conventional methods to clean up oil spills often involve both physical and chemical processes that might do more damage toward the coastal environment than the oil spill itself (Ndimele, P. E., 2010). Unfortunately, there is increasing demand to develop more eco-friendly techniques that will can clean up environmental contaminants and also restore the aquatic ecosystem back to a healthy state (Ndimele, P. E., 2010). How and why phytoremediation is a promising method of bioremediation will be explored.

Why contaminants are a big concern

Coastal ecosystems are still influenced by human interaction with the environment and the types of resources that they utilize on a daily basis (Marcovecchio, Jorge E., et al., 1994). The estimated amount of crude oil released into the water is between 1.7 to 8.8 million metric tons and more than 90% is related to human use, such as waste disposal (Ndimele, P. E., 2010). High amounts of pollutants such as sewage in coastal areas can have a negative impact on organisms by depleting the amount of oxygen and asphyxiate underwater life (Matthiessen, Peter, 2002). Currently, there are land based methods to help remediate the contaminants in the coast, and one of them is phytoremediation. 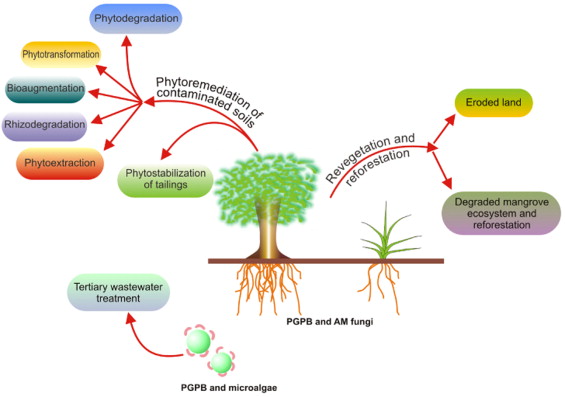 Figure 1. As shown in this image, phytoremediation has several stages in removing contaminants. It also provides a few environmental benefits such as reforestation. Phytoremediation can directly influence microbes such as fungi and algae (De-Bashan, Luz E., 2012).

Bioremediation methods by using plants have proven to be useful for contaminant removal in soils. But the main concern that arises from phytoremediation is that because phytoremediation is still a new technology, the actual processes of contaminant removal by plants is still not fully understood. Other concerns in using phytoremediation with plants is that there are not very plants capable of taking up PCBs, and thus more research needs to be. Plants that are in symbiotic associations with mycorrhizal fungi need to also be taken into consideration when it comes to phytoremediation (Kumar, Vankayalapati Vijaya, 2017). While plants can take up contaminants, there are certain pollutants that cannot be degraded such as heavy metals and they will keep on accumulating in the plant tissue.

Contamination in coastal areas poses a serious threat to both the environment and to other organisms. Phytoremediation is an inexpensive, but efficient form of bioremediation and it can undergo several stages to degrade contaminants into less . So if you want to help clean out contaminants at the coast with environmentally friendly methods, plant some trees nearby. But most importantly, spread the word about this recent bioremediation and why using plants is important for dealing with pollutants. If these organisms can put in so much effort to remove hazardous material from the soil, then we should help them out too.

Lin, Qianxin, and Irving A. Mendelssohn. “Potential of restoration and phytoremediation with Juncus roemerianus for diesel-contaminated coastal wetlands.” Ecological engineering 35.1 (2009): 85-91.

Lin, Qianxin, and Irving A. Mendelssohn. “The combined effects of phytoremediation and biostimulation in enhancing habitat restoration and oil degradation of petroleum contaminated wetlands.” Ecological Engineering 10.3 (1998): 263-274.

Matthiessen, Peter, and Robin J. Law. “Contaminants and their effects on estuarine and coastal organisms in the United Kingdom in the late twentieth century.” Environmental Pollution 120.3 (2002): 739-757.

Ndimele, P. E. “A review on the phytoremediation of petroleum hydrocarbon.” Pakistan Journal of Biological Sciences 13.15 (2010): 715.